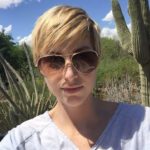 Where are you from? I am from Florence, Alabama. A super small town in Northern Alabama of about 39,000 people. I only had 50 people in my high school graduating class!

Where do you live now? I currently live in Phoenix, Arizona and attend Arizona State Downtown.

What do you do for fun? I love to lift weights. Most of my free time, when it actually exists, is spent at the gym or at home hanging out with my three furbabies. I also enjoy playing video games. I spend most of my time studying and learning that I like to “not think” during my off-time activities.

What is your favorite drink? I love Pinot Noir!

What advice would you give your younger self? Stop worrying so much about what other people think or do. Be true to your convictions regardless of the status quo.

What are you most proud of? I am proud of my independence. I am a first-generation college student and one of the only individuals in my family to ever live on their own, make their own money, and be generally satisfied with life. I come from a poor, working-class family and “getting out” took a lot of hard-work and sacrifice. It was against the “norm” in my hometown to pursue something other than getting married and having kids. All my current success is directly related to my decision to join the military at 18. This decision opened so many doors for me.

Where is your favorite place to travel? In 2016, I went to Iceland. It was the most beautiful place I have ever been. It’s this small island with so much topography. Icebergs and active volcanoes, the greenery. It was absolutely breathtaking. I hope to go back someday.

What is one thing people would be surprised to know about you? A lot of people seem surprised when I tell them two things: I am an only child and that I am a veteran. Not exactly sure why, but those are the two things I get most questions about.

Where do you go to find inspiration? I wouldn’t necessarily name a place that gives me inspiration per se, but just by striking up a conversation with someone, you can learn so much about the world. Everyone is on a personal journey and we all have different backgrounds. Hearing about individuals like myself who have overcome their past keeps me going even when I feel burned out. Other people’s journeys are inspirational to me.

Where’s your happy place? Definitely the gym. It’s the one place where I am not obligated to speak to anyone. I put on my headphones, I work on my body, and I can focus 100% on me. This is where all my frustrations from the day are handled.

Who is your role model/mentor? Dana Linn Bailey is a bodybuilder from Pennsylvania. She was the first Ms. Physique Olympia which is one of the highest awards in bodybuilding one can attain. Obviously, many see bodybuilding as a “man’s only world” and she broke through. She had to deal with a lot of negativity throughout her career. Name calling/shaming, she was too muscular, too manly, but she took all that negativity and became a champion. She now owns and operates 4 different multimillion businesses. She’s married and has an amazing supportive partner. She has been very open about all of her personal struggles dealing with people’s comments versus her self-esteem. I can relate because I have been in male-dominated careers my whole life. Obviously, my father raised me since my mother died when I was young and being in the military, I was the only female working with 20 other men. Surgical medicine, which is my career goal, is also a male-dominated career. It’s amazing and inspiring to see women overcoming this idea of how they should look and/or what they should be doing.


How Jessica got involved

What inspired you to get involved with CanCan? My mother passed away from breast cancer when I was just 9 years old. Additionally, I learned that I was BRCA 2 positive and decided to have a prophylactic bilateral mastectomy at the young age of 24. I want to share this journey with other women who may find themselves in a similar position in order to empower them.

What is your favorite memory from a CanCan party? I just finished my first 3 CanCan Parties and I would say the best part would be when one of the attendee’s eyes light up when they’ve learned something knew about their bodies or cancer. Knowledge is power.

How can people help support someone going through cancer? I would say be focused on listening instead of giving advice. Cancer affects people differently. Be open, free from judgement, and let them vent. Let them be angry and let them cry, let them scream if necessary. Don’t respond with calm down or “everything will be okay.” Cancer is scary, it’s real. Let them get everything out emotionally. This a natural part of the grieving process.

What is the most important thing you want attendees to learn at a CanCan party? How to get checked and tested.

How many CanCan parties have you hosted/attended? I have hosted 3 so far!

Do you have any events coming up? I just finished my first 3 parties at ASU, but I am excited for the coming spring semester and I already have interested organizations.

Learn more about the CanCan program